For the Los Angeles Rams, 2017 was a complete turnaround of fortunes. Rookie Head Coach, Sean McVay had the team playing well above expectations. Second-year QB Jared Goff flourished in McVay’s system. Todd Gurley returned to the form of his rookie season. Although the defense had their struggles, DC Wade Phillips still had them playing well enough to win the NFC West and host a playoff game. What does that mean for 2018? The team once again expects to be near the top of the NFC West and the NFC as a whole. What will that entail? Many repeats of what I list above and some bold expectations. Here are three bold predictions for the 2018 Los Angeles Rams.

This may not be too bold. Especially considering the moves they made in the offseason. Nonetheless, the Los Angeles Rams defense had some issues in 2017. In fact, they finished 19th overall in total defense. Thus prompting the organization to make some big moves in the offseason. They brought in Aqib Talib, Marcus Peters, and Ndamukong Suh to try to secure that defense. In my opinion, Peters and Talib alone were enough. However, with Suh plugging the middle, the Rams could be one of the best defenses teams will have to face in 2018.

This team is good enough to make it that far. The key off-season additions will also help in this quest. QB, Jared Goff has a true weapon with Brandin Cooks. He will pair well with Cooper Kupp and Robert Woods. Todd Gurley, who finished 2nd to Kareem Hunt in 2017 should be up there again in 2018. Having the playoff experience from a year ago will go a long way in this team reaching this status.

2017 was a key year for Jared Goff and the Los Angeles Rams. Indeed, obtaining Sean McVay was a big help for Goff. It will be an even stronger improvement in 2018. Goff, as we mentioned above, now has a legit deep threat in Brandin Cooks. I am not saying that Sammy Watkins wasn’t, however, Cooks is better. This, coupled with Goff and the rest of the Los Angeles Rams being in the same system for a second season all make the cream rise to the top.

The Los Angeles Rams are a team of youth. However, they have enough veterans that they should make a solid run at the Philadelphia Eagles and the rest of the NFC. If these bold predictions come to fruition, the Rams could become a team of destiny.

Do you have any additional bold predictions for the Los Angeles Rams? Leave a comment below.

Stay with WBLZMedia for all your Los Angeles Rams news and information. Also, be sure to follow WBLZMedia on Facebook.

NFL: Three Players to Declare for the ... 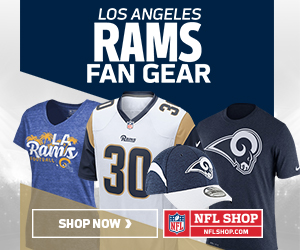